Have you ever wondered what all the fuss is about when it comes to red reishi mushroom? Well, I am sure that at some point in our lives our moms have told us that health is wealth. And it is pretty obvious that in order to keep our body free from disease, we need to have a healthy lifestyle. But truth is we often end up with the wrong diet simply because we do not have time to prepare our food, and often the food we eat is commercially grown with chemical residues from fertilizers and pesticides. It is no surprise then that many people are getting sick despite eating supposedly “healthy” foods.

We need help and that is where red reishi mushroom comes in. Up until recently, not a lot of people had realized that this fungus is sort of a miracle plant. Traditional medicine has dubbed it as the “mushroom of immortality” or the “medicine of kings” because of its amazing benefits to our health. This mushroom is not new to eastern medicine; in fact it has been used for hundreds of years. And all this time, Asians have been enjoying the healing effects that this mushroom can give. Let me tell you more.

So what’s so spectacular about this mushroom? 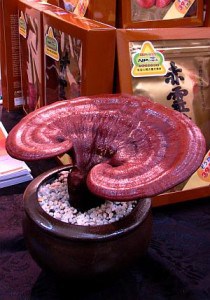 Red reishi is also believed to inhibit the growth of cancer cells because of its effect on the immune system.

A lot of people are doubtful how a single fungus can positively affect the human body in so of ways. But traditional Eastern medicine believes that this mushroom is far better than anything that mainstream western medicine has offered. They believe that Reishi defends our body against disease, against physical or emotional stressors and puts the body back into a state of balance.

Keeping ourselves healthy is not only about the absence of sickness. We may reason out that it is easier to pop a prescription pill to get us back to our old self. But we have to realize that synthetic medicine can eventually tax our vital organs (especially the liver), and prolonged use of such medication can lead to other problems – but that is a different topic altogether. My point is this: The benefits that we can get from red reishi are numerous. The effect that it has on our bodies is not just addressing the symptoms of the disease. Rather, it balances of our body functions so that we will have the ability to resist disease. That, to me, is getting to the root cause of the problem. And the best part of all is that, unlike prescription drugs, you do not have to deal will possible ill effects later on.

Don’t you want to see the miracle of red reishi mushroom working in you?

Hi! My name is Claire and I am a lover of great coffee. Coffee has always been my guilty pleasure. I love the taste, the aroma, and the comforting feeling I get from every cup... Read More